Why isn’t a Trampoline called a Bounce-a-line?

How sometimes, brands can be the victims of their own success.
0   
By RHM Branding RHM News Strategy 13 July 2022

In a team meeting recently, a colleague asked why trampolines weren’t called bounce-a-lines or something, because that would make much more sense.

Fair point, I thought – so decided to find out.

Brilliantly for me, and rather luckily for this ever so slightly frivolous blog article, the answer is BRANDING!

Fact of the day:

The first modern Trampoline was invented in 1936 by George Nissen and Larry Griswold. As story goes, the name of the product was derived from the Spanish word ‘trampolín’, meaning ‘diving board’, The anglesised version of the word became their trademark.

So ‘Trampoline’ was once a brand. But the trademark became lost after the word was deemed to have become too generic and having replaced the actual generic term (rebound tumbler) in everyday language.

Other former brands have gone the same way – they’ve become part of common parlance. They’ve passed into our vernacular.

All former brands. Look them up.

And then there’s Aspirin, originally a trademarked product of Bayer, the German pharmaceutical giant. Whilst Bayer still owns the trademark in over 80 countries around the world, it lost the trademark in the UK, the US and France after the confiscation of Bayer’s US assets and trademarks following the First World War.

So, in these countries the original brand has become the name for the drug – now in use by all brands.

It lost its brand status in specific markets.

And speaking of Bayer, what about this… 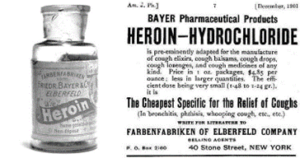 Yes, heroin – it was launched, trademarked, and marketed by Bayer as a non-addictive substitute for morphine between 1898 and 1910. And get this – it was used as an over-the-counter cough suppressant (amongst other things).

After the war, Bayer also lost its rights to the Heroin brand. In hindsight, and unlike Aspirin, Bayer’s forced disassociation with Heroin was probably no bad thing!

Brands are often lauded for being so successful that they become symbiotic with the product category. It’s an achievement certainly, but becoming a generic term is not always a good thing for a brand.

On that line of thought, here are 10 are other products that have become so synonymous with their product category that their brand is all but lost (or has it become enhanced?);

Polaroid – still a brand in its own right, but we tend to refer to instant photographic prints as ‘polaroids’ regardless of the camera brand.

Post-It – type ‘post it notes’ into Amazon and see how many alternative not-post-it-notes there are.

Sellotape – everyone refers to Sellotape unless they’re a Blue Peter presenter. No one else on earth refers to ‘sticky back plastic’.

Hoover – obvious, but has to be on the list. I don’t dyson my carpet. I use my Dyson to hoover.

Stanley Knife – not the only brand of retractable trimming knife. But the only one that helps me understand what one of those actually looks like.

Astroturf – nope, not a generic term. It’s a brand.

JCB – a term we all use to describe one of those diggers with the arm on it. In the UK certainly, we don’t call them Volvo or Komatsu or even Caterpillar. We refer to them as a JCB. It just sounds right.

And there are many, many more.

Brands hold great meaning for most of us. Brands paint pictures in our minds, they inform us about the qualities of the products we buy, they provide us with a guide to how much we should pay. They can evoke emotional responses and make us feel reassured and safe.

Sometimes they even become so familiar that they lose their own identity.

How long before Google goes the same way?