Even if your business has no discernible differentiators, it’s still possible to stand out in a crowded market.
1   
By RHM Branding RHM News Strategy 15 June 2022

I’ve said it before and it’s worth saying again.

Because there are A LOT of people out there who don’t get it.

If you’re a B2B business owner, director, or salesman… I’m talking to YOU.

If you’re a marketer, you’ll know that what I’m about to say is true. You’ll probably be bored of hearing it.

Or even bored of saying it yourself.

But here we go, nonetheless.

A logo is NOT a brand.

A logo is a logo.

It’s a badge, a flag. A symbol that represents or reflects your brand.

It’s a shadow of your brand.

It is not your brand.

The logo was first generated as a branding iron to scorch the hides of cattle to make ownership unmistakable and discourage theft. A logo is an identifier, a shortcut to recognition.

And recognition is of course, important.

Take your average supermarket – a place where most of us want to spend as little time as humanly possible.

Where would we be if we couldn’t recognise our favourite beans? Or chocolate? Or dry roasted peanuts? Or toothpaste? Or toilet roll? Or dog food?

Still in the supermarket, that’s where.

Brands help us to make quick buying decisions and then go home, having spent slightly more than we intended.

But a brand is so much more than a flag or a badge. It’s not a colour palette or a quirky font.

It’s the experience that people have (or expect to have) when they engage with your product or service.

That’s clearly true of consumer markets. It’s not just the anticipation created by the advertising; it’s the unboxing experience, the try on, the taste, the test drive, the form, the function and the admiring looks we imagine we’re getting from passers-by.

In these markets, brands can deliver enormous returns, so it’s understandable that huge investments are made in developing brand positioning, brand stories, brand personalities and of course, the brand PURPOSE (the bit where all of us marketing types realise that we’ve begun to believe our own bullshit, as we try to justify the existence of a bottle of fizzy water).

But what about B2B markets where buying decisions are (arguably) more considered and can take months, if not longer? What role do brands play in that space?

Well, it’s fair to say that more often than not in B2B, scant attention is paid to the brand. I just took a look at Gloucestershire’s top 100 businesses. Only a handful have developed what I’d call a strong brand. They’ve all got logos of course, but the majority have done little more than that. 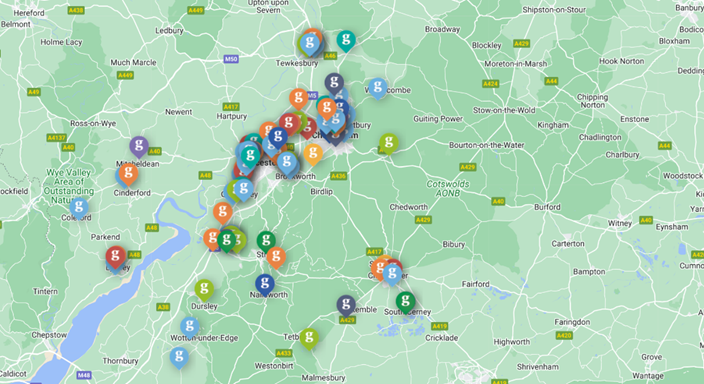 It might be enough for them – they’re clearly successful businesses, so they must be doing (or have previously done) something right to get them to where they are now. Who am I to criticise?

But a lack of investment in the brand is rarely a recipe for growth (or even survival in competitive markets), so it’s surprising how few B2B business have ever really thought about their brand positioning. And fewer still have articulated it.

Even fewer have tried to create a brand personality. An attitude. A distinct tone of voice. A set of values and behaviours for the brand.

Oh yes, loads of business have ‘brand’ values. But they’re for the most part all the same. Innovative. Inclusive. Collaborative. Entrepreneurial.

A good brand should have a purpose. Not one that’s been made up just to try and tell a good ‘brand story’, but one that’s driven by the reason why the company was imagined into existence in the first place.

Brands should be more than platitudes.

A brand should be a driving force that affects the way people feel about a company or their products or services.

It should influence the way employees feel about their employer, that leads them to behave in specific ways – not because they’ve been given a set of values on a piece of paper, but because the behaviour is obviously the way they should behave, given the brand they work for.

A good brand should be based in a truth that’s at the heart of the business.

There’s a really nice example we like to use here at Really Helpful Marketing – a business that neatly arrived at a brand purpose; one that led to differentiation through a clear brand personality.

We came across it whilst looking for examples of good brand practice in the Accountancy sector.

And I’ll be honest, this was the ONLY good example we found.

This was an accountancy firm based in Sacramento, California by the name of MGO. They’ve changed their branding now (more’s the pity) but back then, I think they had something really special.

So MGO did accountancy.

I just want someone to do my accounts. I’ve got no way of knowing whether you’re better or worse than anyone else because I don’t understand accountancy, that’s why I need an accountant.

Accountants will say, we’re really good at tax returns, or bookkeeping, or putting numbers in columns, or whatever it is that accountants do.

But they’re all saying those things. There’s virtually no discernible differentiation.

Until MGO came along.

They didn’t have any obvious differentiators either. But they still managed to differentiate by giving themselves a personality.

Not ‘our accountants are actually really cool people who like skateboarding, skydiving and shark fishing’.

No, no-one’s buying that. And even if they believed it, who’d care if their accountant owns a camper van?

So how did MGO position their brand?

Boring because they love the numbers. Boring because they get a kick out of going over the books. They love doing the dull, diligent work that most business owners haven’t got the time for and would probably get wrong even if they did. 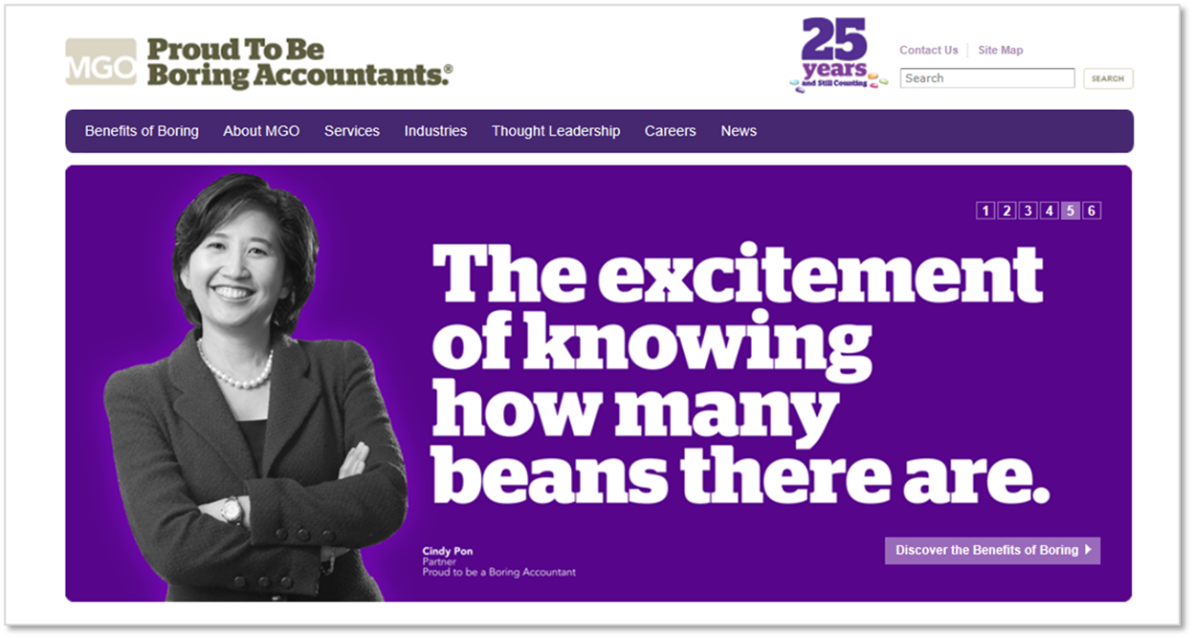 And here’s the thing. Because they’re boring, because they love the dull stuff, we start to believe they’ll be really good at it – it gives them differentiation. They’re good because they want to squirrel themselves away in a dark room and work on the numbers.

That’s actually no different to any other accountant apart from the fact that they’re SAYING it.

And it’s an idea that gives the MGO team a clear focus – that’s what their customers want them to do – so they focus on doing that – nothing could make their customers happier. It gives the brand a PURPOSE that we can all believe, because it’s based in a truth, an insight.

THEY STOOD OUT. In a ‘boring’ market, having a personality is differentiating.

Take a look for yourself. Search for accountants in your local area. Start reading their websites. I guarantee complete and utter boredom in minutes.

So B2B people, ask yourselves whether you’ve got a brand.

Or is it just a logo?